When a musician friend read her poems, he told Inge Ginsburg they sounded like death metal lyrics. She went on to form the metal band TritoneKings with Pedro Da Silva and other musicians.

The only catch? Ginsburg, who's now know as “Death Metal Grandma,” is 96 years old. Her subject matter is as heavy as her sound, grappling with struggles she's faced in life and the loss that comes with advanced age. But in spite of it all, music has always given her life.

After fleeing the Holocaust in Austria through the Swiss Alps, a journey during which she nearly froze to death, Ginsburg and her husband eventually arrived in Hollywood with little more than her talents in tow. There she composed music for Nat King Cole, Doris Day and Dean Martin and even performed on Switzerland's Got Talent before recently auditioning for America's Got Talent. 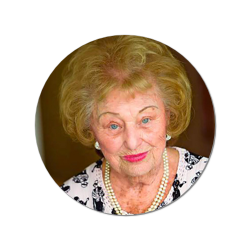